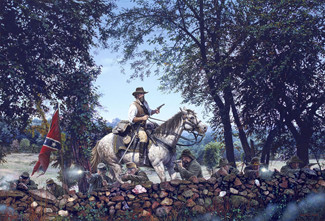 "Everything at the Cross Roads was going to the devil as fast as it possibly could", were the descriptive words of federal infantry Colonel McMillen, at Brice's Crossroads.  No truer words were spoken about the incredible events taking place in the steamy hot woods and pastures of northeast Mississippi.

Weeks earlier Major General William T. Sherman had sent the well respected Brigadier General Samuel D. Sturgis and a force of 8000 men to destroy "that devil Forrest".   Sherman offered a major general's promotion to any one of his brigadiers who could kill Forrest.  Sherman said "It must be done, if it costs ten thousand lives and breaks the Treasury."   The Federal Army was in the process of laying waste to the South, and Forrest and his men were the main threat to Federal supply lines and Sherman's goal to capture the prize of Atlanta.  General Sturgis had an earlier encounter with Forrest, and with typical bravado wrote to General Sherman, "My little campaign is over, and I regret to say Forrest is still at large...I regret very much that I could not have the pleasure of bringing you his hair, but he is too great a plunderer to fight anything like an equal force."

Receiving news of the Federal movement, General Forrest began a forced march from Tupelo, with 3500 men to intercept the Yankee invaders. Torrential spring rains made travel on the muddy roads and swollen streams arduous and difficult, but Forrest had a plan to use conditions to his advantage.  Forrest said "I know they greatly outnumber the troops I have at hand, but the road along which they will march is narrow and muddy; they will make slow progress.  Their cavalry will move out ahead of the infantry, and should reach the crossroads three hours in advance.  We can whip their cavalry in that time......It is going to be hot as hell, and coming on a run for five or six miles over such roads, their infantry will be so tired out we will ride right over them."

It all would happen just as Forrest predicted.  Dismounting his troopers and fighting them on foot with six-guns, carbines and shotguns, was devastating to Sturgis's men. Forrest gave orders to his artillery commander John Morton to drive his guns close to the enemy without support and load with double-shotted canister fire.  After a number of hours the Federal line gave way.  Sturgis said, "Order soon gave way to confusion, and confusion to panic."  In a frantic race to the rear, Federal soldiers threw down their arms and equipment with wild-eyed screaming Confederates at their heals.  For over the next 40 hours Forrest and his men chased the remnants of General Sturgis's army.

The battle was the most one-sided defeat of any force in the war between the states.  The news of the defeat stunned General Grant's headquarters in Washington.  Secretary of War Edwin Stanton said, "Forrest is the devil, and I think he has got some of our troops under cower."

And so it was for the devil at the crossroads.