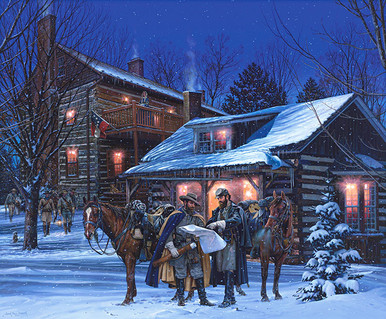 On March 23rd General Stonewall Jackson's army had suffered a tactical defeat at the Battle of Kernstown. But Jackson's boldness and audacity during the battle alarmed Federal officers to the point that the size of the Confederate force was greatly overestimated. Federal plans to send two divisions away from the Valley to reinforce General McClellan's Peninsula Campaign were cancelled.

Jackson retreated up the Valley Pike to Woodstock with the Federals following behind. He made his headquarters at the large two story log home of Miss Daisy Ruddell Stover. The home was located next to the Valley Pike at Narrow Passage Creek which flowed into the North Fork of the Shenandoah River. Believing Narrow Passage to be good ground to defend, General Jackson formed a defensive line to do battle if the Federals continued to advance.

On the 26th of March General Jackson met for the first time the talented map maker Lt. Jedediah Hotchkiss. The General visited with Hotchkiss about his topographical drawing abilities and viewed some examples of his work. Jackson then said, “I want you to make me a map of the Valley, from Harper’s Ferry to Lexington, showing all points of offense and defense in those places. Mr. Pendleton will give you orders for whatever outfit you want."

General Jackson now had in place one of the key men who would give him the strategic information needed to out maneuver the Federal armies he was facing. Hotchkiss became one of the more valued members of the General's personal staff. Stonewall Jackson would begin his Valley Campaign with the help of Jedediah's 8 foot map of the Valley, and his army would not lose another battle.