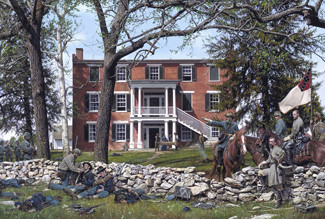 They were four of a kind. Hard-bitten and battle tested Confederate generals. Jubal A. Early, John B. Gordon, John C. Breckinridge and Stephen D. Ramseur were given the task by Robert E. Lee to attack Federal forces in the Shenandoah Valley and relieve pressure on Southern troops under siege at Richmond. Commanding the Confederate forces, General Early had 17,000 seasoned veterans from the Army of Northern Virginia to do the job. They were among the best troops of the Confederacy.

On July 24th General Early's army marched north from Strasburg on the Valley Pike.  At 7:00am the cavalry in gray were engaged with Federal forces under the command of General George Crook south of Kernstown.  By 1:00pm Early's generals had their divisions deployed and ready to engage the Union forces who had occupied the Pritchard farm and the strategic Pritchard's Hill. The beautiful home known as 'Brightside", a name given by the Pritchard family, would again be located at the center of a raging battle. Two years earlier, Confederate forces under the command of General "Stonewall" Jackson had attempted, without success, to defeat the Federal army at Pritchard's Hill on March 23, 1862.

Under orders from General Crook, Union Col. James A. Mulligan's 23rd Illinois, the "Irish Brigade", along with another brigade made the first move advancing south on hidden Confederate brigades.  It wasn't long before he found them and retreated back toward Pritchard's Hill. In the meantime General Breckinridge had located a ravine on the east side of the Valley Pike and was able to keep his troops concealed as they deployed on the exposed Union left flank.  Ordered to again advance in force, Col. Mulligan, supported by the regiments under Col. Rutherford B. Hayes, moved toward General Gordon's division secured in Barton's Woods. Breckinridge then unleashed his brigades, quickly routing the exposed Union left flank. The Union forces fell back to make a stand along the stone wall of Pritchard's Lane. It was here that Col. Mulligan was mortally wounded and the Union line collapsed and began the flight back toward Winchester.  Avenging Stonewall Jackson's only loss in battle, Early's generals were now kings of the hill.