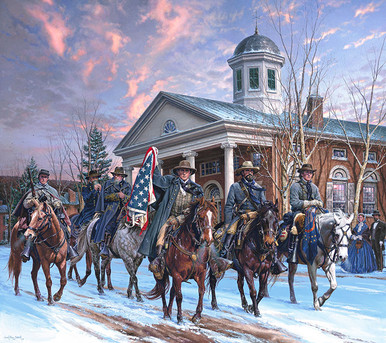 McNeill's Rangers were a partisan unit of Confederate cavalry raiders whose exploits would become legendary in West Virginia.  Formally designated as Company E of the 18th Virginia Cavalry, they were led by Captain John Hanson McNeill.  The Rangers operated behind enemy lines attacking Federal wagon trains, outposts, railroad yards, and generally "raising hell" anywhere they had the chance.

Sadly on October 3rd 1864 in a predawn attack near Mt. Jackson, Captain John Hanson was mortally wounded.  The command of the unit was passed to his son, 22 year old  Lt. Jesse McNeill.  Jesse was known as a superior rider, an excellent shot, but was impetuously bold and brash to a fault. His father once described him as "a hair-brained daredevil if ever there was one."

Two years earlier, Captain John McNeill had devised a plan to kidnap US Generals Kelly and Cook for the discourtesy shown to his wife in 1862.  Mrs. McNeill had been refused a travel passport by General Kelly to visit her husband in Moorefield. While traveling without a passport through the area she was arrested and sent back to Ohio.

Now in command of the Rangers and with the help of John B. Fay, Jesse decided to put his father's plan into action.  Fay was born in Cumberland and knew every house and street in the city.  Jesse sent Fay and C. Richie Hallar to scout the city of Cumberland learning where US Major Generals Crook and Kelly would be sleeping. Fay was also tasked to find the best route for the Rangers to take through enemy territory.

During a blinding snow storm on the night of February 21, 1865, McNeill's Rangers headed for Cumberland Maryland.  The Rangers rode quickly through the dark snowy countryside on New Creek road, when suddenly they encountered a Federal sentry post.  As the sentry challenged the riders, "Halt! Who comes there", instinctively Lt. Jesse McNeill charged the sentry firing his revolver at the man's head as he passed.  The shot missed the man but scared the sentries so bad, they immediately surrendered.  But the Rangers were not happy with Jesse possibly sounding an alarm with gunfire. Fortunately the storm seemed to muffle the shot.  Some Rangers wore Federal blue overcoats and fooled enemy pickets and patrols by whistling such Yankee tunes as they knew and bandying words with the Federals. The dark night and heavy snow made it impossible to distinguish between shades of gray or blue.  An hour before daybreak the Rangers were in the city and went to work.  Both Generals Crook and Kelly were quickly snatched from their beds, dressed and placed on mounts. The General's headquarters flag and regimental flag were taken as trophies.  Even General Kelly's famous fine horse named "Philippi" was taken as a prize.  Ranger John Fay led the way out of town at a fast pace.  Four miles from the city an echoing boom of a cannon was heard in the distance, sounding the alarm.  Federal cavalry was soon hot on their trail.

The expedition had been a great success.  As the Rangers passed in front of the courthouse in Romney, the captured Generals and trophy flags made for a legendary moment.  Leaving Romney in triumph, the Rangers took the little used Old Trough Hollow Road towards Moorefield with the Federal cavalry still in pursuit.

Describing the raid General John B. Gordon said, "In daring and dash it is the most thrilling incident of the entire war."  Col. John S. Mosby (Mosby's Rangers) extended his hand to Lt. Welton and said, "You boys have beaten me badly. The only way I can equal this is to go into Washington and bring out Lincoln!" Even US General Crook exclaimed, "Gentlemen, this is the most brilliant exploit of the war!"  The legend of McNeill's Rangers still lives on today.