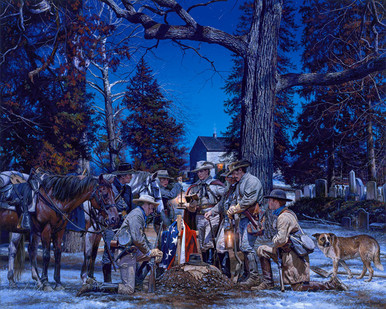 The early years for Mosby's Rangers had been filled with exciting raids and adventures.  The commander of the 43rd Battalion of Virginia Cavalry, John Singleton Mosby, had filled the Partisan Ranger ranks with bold and daring young men from the local community.  These men, many in their teens and twenties, were friends before hostilities began in 1861.  Raised in the rural environment of the Shenandoah Valley, they were all skilled horsemen and crack shots.  It was said that a Ranger could be riding at full gallop and fire 3 rounds into a tree before he passed.  These skills accounted for many empty Federal saddles and brought notoriety to this elite force of scouts and guerrilla fighters.

The camaraderie of Mosby' Rangers manifests clearly in the old period photographs of the group. Earlier in the war Ranger losses were few and sporadic, but as the war progressed and casualties occurred more regularly, Mosby and his Rangers felt great sadness with the loss of each of their friends.  The bond of brotherhood was like none other during times of war.

During the winter of 1864 Federal patrols were very active during the day searching for Rangers in the Shenandoah Valley.  So it was under a moonlit sky that Mosby and a few of his men performed a secret nocturnal burial for one of their own at the Old Chapel Cemetery.  Reading from the "Good Book", the fallen soldier was given a Ranger farewell.

"No human being knows how sweet sleep is but a soldier." - John Singleton Mosby