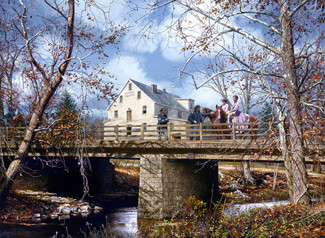 After Confederate General Jubal Early's nearly successful raids on Washington through Virginia's Shenandoah Valley in the summer of 1864, Federal General Philip H. Sheridan was given orders in the autumn to "close the back door on Washington". To accomplish his task General Sheridan was placed in command of the VI and XIX Corps backed up by artillery batteries and three divisions of cavalry.

Now commanding over 43,000 soldiers, Sheridan decided to destroy anything and everything of value in the fertile Shenandoah Valley that could assist the Confederate Army. His goal was to make the Shenandoah a wasteland, "where a crow would be compelled to carry his own rations.”

General Sheridan systematically sent his soldiers throughout the Valley to destroy stores of grain and wheat, to burn barns, mills, and confiscate livestock. In fact, Sheridan and his men would torch much of the scenic valley to the ground.

When Federal cavalry came to the sleepy little town of Edinburg to burn the large mill located there, local legend recounts how two teenage granddaughters of the mill's owner saved the structure. Nellie and Melvina, granddaughters of Major George Grandstaff who had valiantly served in the army during the Mexican War, raced to General Sheridan's headquarters to plead for the sparing of the mill. Perhaps out of respect for the services of a US Army war veteran and the charms of two beautiful southern belles, General Sheridan gave the girls a letter ordering his troopers to save the mill.

Galloping back to Edinburg, Nellie and Melvina gave the letter to the Federal cavalry officer in charge and soon a bucket brigade was formed with the help of the townspeople to put out the already burning mill.  Luckily the mill was saved in time.

When General Sheridan passed through Edinburg he had dinner with Major Grandstaff and asked Nellie if she would name her little dog after him in return for saving the mill.  Nellie spiritedly declined the notion.  Sheridan was also quite proud of his fine horse and was known to have said that his mount would never carry a Confederate flag.  Charmingly Nellie asked if she could take a ride on the General's fine horse, and Sheridan said yes.  After her ride General Sheridan helped her down from his horse, and Nellie defiantly flipped up her skirt revealing a Confederate flag sewn on her petticoat.  Sheridan would learn that he would never break the southern spirit.