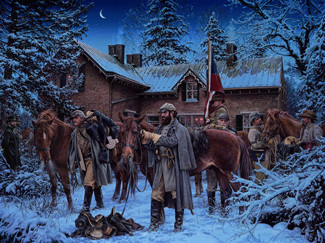 Wisps of steam rose from the backs of the unsaddled horses on the cold moonlit evening of February 4, 1862.  The countryside was covered with 4 inches of fresh snow and the waning moon was overhead as General Jackson returned from a long day's work to his headquarters at the Moore's home on Baddock Street.  Waiting for Stonewall's return was an envoy on a special mission from the Governor of Virginia.  It was Colonel Alexander Boteler's mission to try and convince General Jackson to withdraw his resignation from the Army of the Confederacy.

General Jackson's Romney Campaign in January had successfully driven the Federals from three counties of Northern Virginia, thus protecting Winchester from invasion.  The difficulties and trials of that expedition also showed Jackson who he could count on during war time operations.  To hold and protect this northern invasion route, General William W. Loring's command was posted in Romney and the South Branch valley.

Other troops would guard Bath and Martinsburg while the Stonewall Brigade returned to Winchester.  This action did not sit well with Loring and his officers who wanted to return to the relative comfort of Winchester.  With the lack of discipline and complaints throughout Loring's command, morale plummeted.  Bypassing the chain of command, Colonel William Taliaferro traveled to Richmond and, incredibly, gained audience with President Jefferson Davis to complain about General Jackson.  On the morning of January 31st General Jackson received a letter from the Secretary of War directing him to withdraw Loring's command back to Winchester.  Jackson's replied to the Secretary that his order would be promptly carried out.  General Jackson concluded the communiqué with his resignation from the Army.

It didn't take long for Jackson's resignation to have an immediate effect in Richmond and Winchester.  There was a flurry of activity in response to this turn of events.  It seemed everyone was concerned and fearful if his resignation was accepted.  Governor Letcher stepped into action on behalf of General Jackson, his old friend.  The Confederate high command learned an important lesson on how to handle Generals in the field.  Over the next two years Colonel Boteler would come to realize just how successful his mission had been, and how the course of military history would have changed had it not been for Stonewall's return.