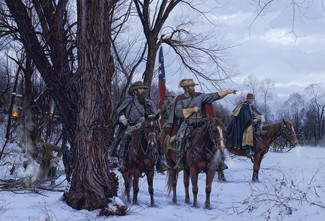 Not wishing to rest on his laurels after the success of the battle of Fredericksburg, General J.E.B. Stuart planned a raid to disrupt Federal supply lines, cut telegraph communication, and force General Ambrose Burnside to weaken his position on the Rappahannock by sending countering forces. Other benefits of Stuart's raid would be to keep his men sharp and active and well supplied with captured stores.

The column headed out the day after Christmas with 1800 cavalrymen and four artillery pieces. As was usual with Stuart's raids, the cavalry covered many miles and had a number of small successful engagements where enemy soldiers, wagons, and equipment were captured.  On the road to the town of Occoquan, Stuart's scouts detected two regiments of Federal cavalry setting up an ambush in the woods along the road. Stuart ordered General Fitzhugh Lee (Robert E. Lee's nephew), and the First Virginia cavalry to ride over the force and clear the woods. Without a moment's hesitation the 1st Virginia roared forward overcoming the surprised Federals and captured 100 of the fleeing Federal troops. Continuing the pursuit, Fitzhugh Lee and his men chased the Federals through the icy waters of Selectman's Ford. The ford was "narrow, rocky, and very difficult" to cross, and to everyone's amazement, Major John Pelham was able to drive his guns through the ford which was said to have been impassable by wheel. Arriving at the deserted Federal camps, Stuart's men carried off anything of value and burned the rest.

After regrouping Stuart's cavalry arrived after dark at Burke's Station on the Orange and Alexandria Railroad, and took over the telegraph office. General Stuart listened to his own telegraph operator describe the buzzing hornet's nest of the Federals communicating with each other on how to catch "the rebel raiders." Typical of General Stuart's audacious personality, he then sent his own message to the Federal commanders, complaining that the poor quality of Union mules was such that they were incapable of pulling all the supplies that Stuart had captured. Stuart attached his signature to the message, and decided that since the enemy now knew his position it was time to move.  Figuring the Federals would assume his force would head south, Stuart and his men headed north to Fairfax Courthouse to surprise his opponent once again.

At Fairfax Courthouse Stuart's luck changed as their column began to take fire from a large Federal force waiting in ambush. But Stuart's men did not return fire, puzzling the Federal troops. A Federal soldier under a white flag of truce was sent to ask if the unknown force was friend or foe. One of Stuart's men sent to meet the soldier advised that the following morning he would have an answer to his question. Stuart ordered enormous campfires to be lighted and used as a screen as he and his men slipped away and escaped during the wintry night.