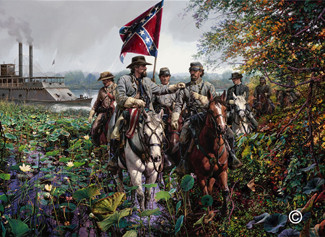 It seemed that nothing could stop the audacious Major General Nathan Bedford Forrest and his cavalry command.   Federal naval officers were not taught to be on guard for an attack from a cavalry unit in the USN training manual. Forrest’s military genius however, did not come from any army manual.  He had a natural instinct for tactics and unconventional warfare, coupled with a bold and aggressive personality.

Three weeks after General Sherman’s capture of Atlanta, Forrest and his Corps were wreaking havoc on Federal garrisons, taking 2,360 prisoners and destroying much of the Tennessee & Alabama Railroad north to Pulaski. Returning to west Tennessee, Forrest turned his attention to the United States Navy who was using the Tennessee River as a supply route for Atlanta.

With the help of Forrest’s ever-faithful commanders, General James R. Chalmers, Colonel Tyree H. Bell with his Tennesseeans, and Colonel Edward W. Rucker, a deadly gauntlet of artillery was set up near Paris Landing commanding a mile stretch of the river.  They didn’t have to wait long for the unsuspecting enemy.  After two days of vigorous engagements, the Confederates had captured the gunboat U.S.S Undine, and the transports Cheeseman, Mazeppa and Venus, the latter two each towing barges richly laden with valuable supplies.  The Cheeseman was badly damaged and burned along with the now emptied barges.  The Undine was one of the largest armor clad boats of her class with eight twenty-four-pound brass howitzers.  With some repairs the gunboat was placed back in action. On the 31st Forrest decided to organize his own navy arming the Undine and Venus with more guns and sending them to do battle with the Federal flotilla at Johnsonville.  Forrest’s success on the river caused the panic-stricken Yankees to destroy and evacuate the huge Johnsonville depot on the 4th of November.

As rain clouds began to cover the autumn Tennessee skies, General Forrest congratulated General Chalmers for their success.  Draped across the General’s saddle was the flag of the U.S.S. Undine, a very rare prize indeed.   His new gunboats and “Horse Marines” cruised the Tennessee river hearing the cheers of men who had not seen a Confederate flag on a ship for two years, “making the air ring with cheer upon cheer.”